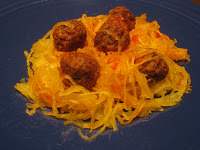 It's Meatless Monday, so whether you're a full-time veg-head like me, opt for meatless Mondays, or even if you haven't hopped on the wagon at all, let's take this opportunity to let vegetables take the spotlight in this classic dish. Spaghetti and meatballs--a weekly dish in my house growing up, and a staple on any Italian menu.  Can we re-do it?  Make it meat-free?  Decrease the calories?  Fake out any non-believers? Spaghetti Squash and Veggie Balls Ingredients: One spaghetti squash + one package meatless veggie balls. (that was easy) Let me introduce you to my new friend: Spaghetti Squash. 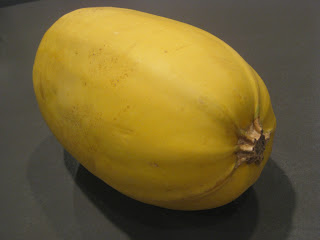 Sure, he may not look like much on the outside, but weren't you ever taught not to judge a book by its cover?? Read more to see what's inside our big yellow buddy. Before we can reveal the magic inside, we've got to soften him up.  Stick him in the oven at 375 degrees Fahrenheit for 40-60 minutes, depending on your oven.  I found 45-50 to be sufficient.  Once he's tender, it'll be easy to... Slice lengthwise, all the way around, and open up: 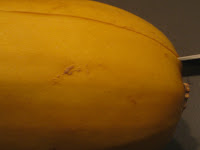 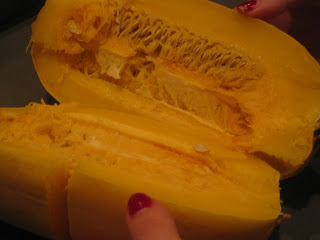 Ah, alright. There's something interesting, but we're not done yet.  With a spoon, scoop out the seeds and mess in the middle. 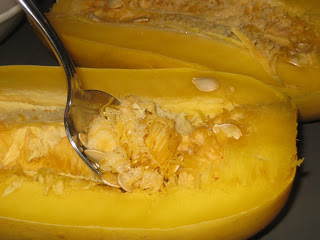 And now, the miracle comes to life.  Take a fork and dig at that squash.  Don't worry, it won't hurt him.  Just scrape it away, and you'll see the spaghetti strands form out of thin air (or dense squash.. same thing.)  Once you separate them from the squash's body, set them aside into a bowl. 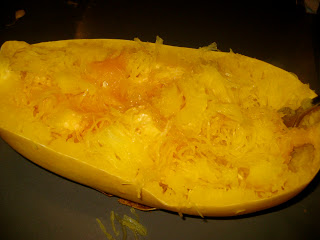 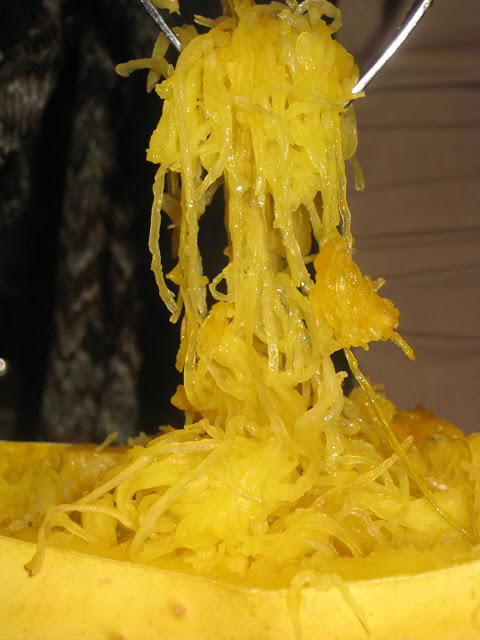 Don't miss any! Get it allllll, let none go to waste!  Keep scraping the sides. 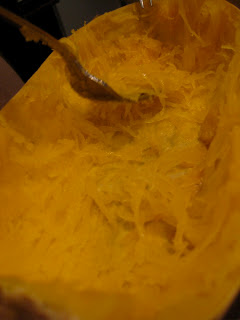 Got it all?  Good.  Now, you should have a giant bowl of "pasta" that looks like this: 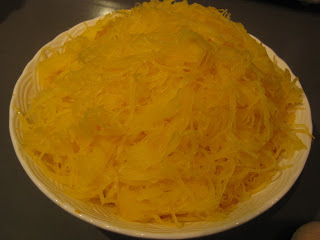 All that spaghetti from ONE squash!  Don't you feel bad for judging him 2 minutes ago? Now, do with it what you would with spaghetti pasta!!  You can toss it in olive oil, season with salt and pepper (and oregano!), add sauteed onions, peppers, minced parsley, other greens... Or serve it up the way we've been conditioned to: Spaghetti and meatballs. ... Or veggie balls ... Veggie Balls These are easy to find frozen.  Mine were from Trader Joe's.  I was never big on meat-sub items, so I'm still experimenting with which brand might be my favorite. Arrange the frozen balls on a baking sheet and cook according to package instructions. Shouldn't take long at all. 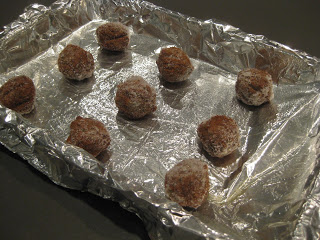 They'll come out looking tasty enough for any carnivore.  Honest--my sister chose mine over the real-meat-ball option beside them! 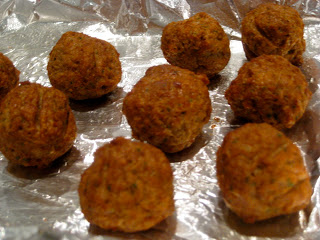 And now, the moment you've all been waiting for: COMBINE! In the marinara sauce of your choice (I recommend Rao's Homemade), mix the sauce, spaghetti squash, and veggie balls.  If you feel like added more nutrients, toss in some roasted red peppers, sliced carrots, or whatever you're craving at the moment. Et voila!  Spaghetti and Meatballs—no pasta, no meat. 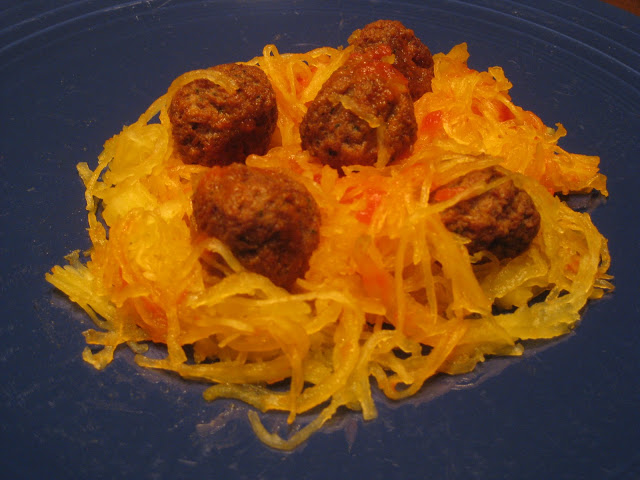 Pin It
Dare you.