Psst! Don't forget to check out last week's giveaway to win an amazing nutrition/health/recipe book, signed by the author!
-----
It's been a while since a new food post, but I recently tried a food that was brand new to me: Sunchokes. Have you heard of this vegetable?  I had never, but then I discovered that it's simply another name for the Jerusalem artichoke.  I'd never actually seen or eaten one of those, either, but had always assumed it looked more like, well, an artichoke (click to learn all about that "new food" dare here). Intrigued, I gathered the details on this native North American tuber: Jerusalem artichokes, or sunchokes, come from a plant that looks a lot like their relative, the sunflower.  What I found, though, looked nothing like a sunflower.  It's the tuber beneath it that looks like a knobby, rough, light brown rock. It looked sort of like ginger, but I honestly questioned whether it was even edible. 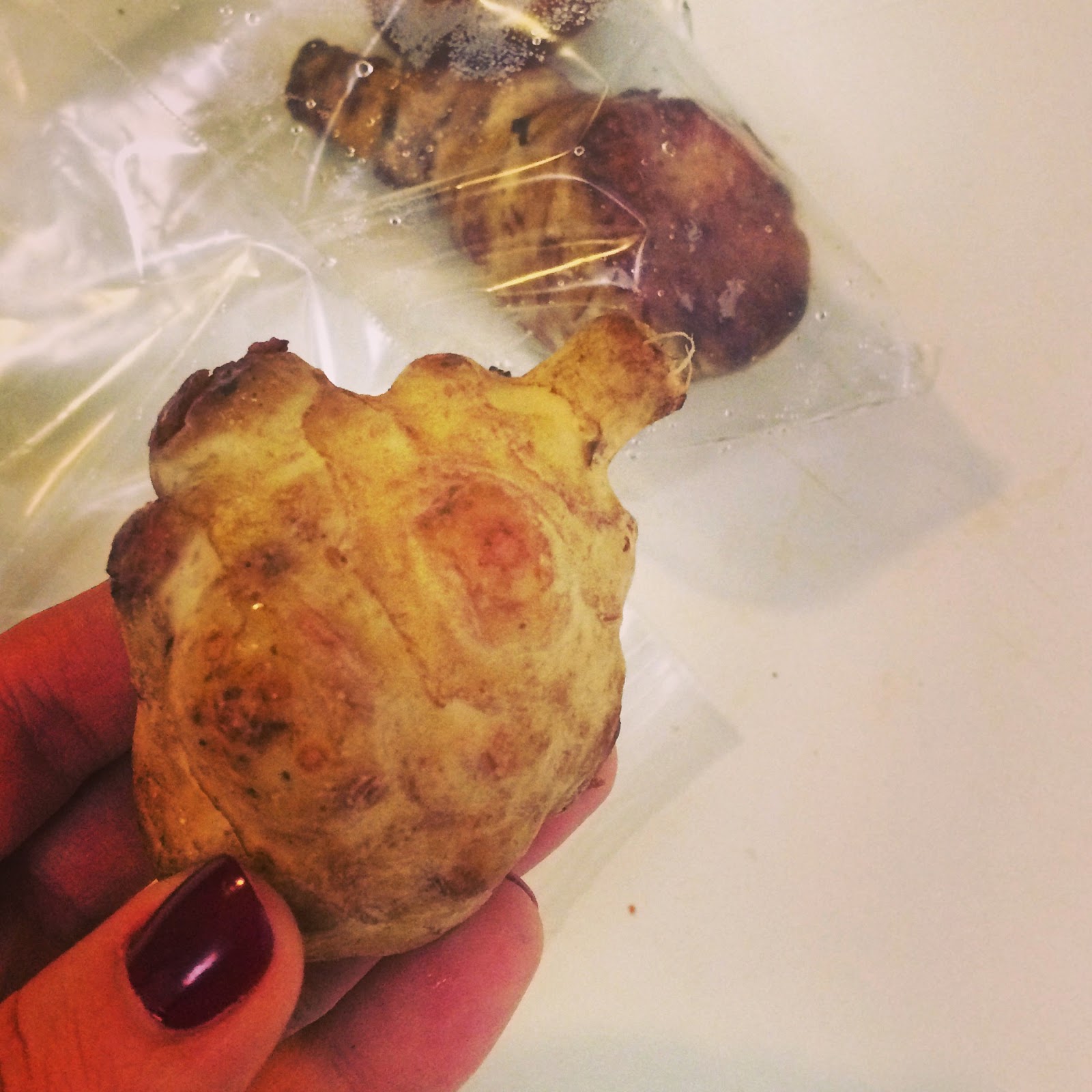 Peeled, cut, and cooked, it wasn't so bad!  Its flavor resembles that of good old artichokes, hence the nickname.  In fact, many sources described its flavor as a cross between sunflower seeds and artichoke hearts. What's inside: 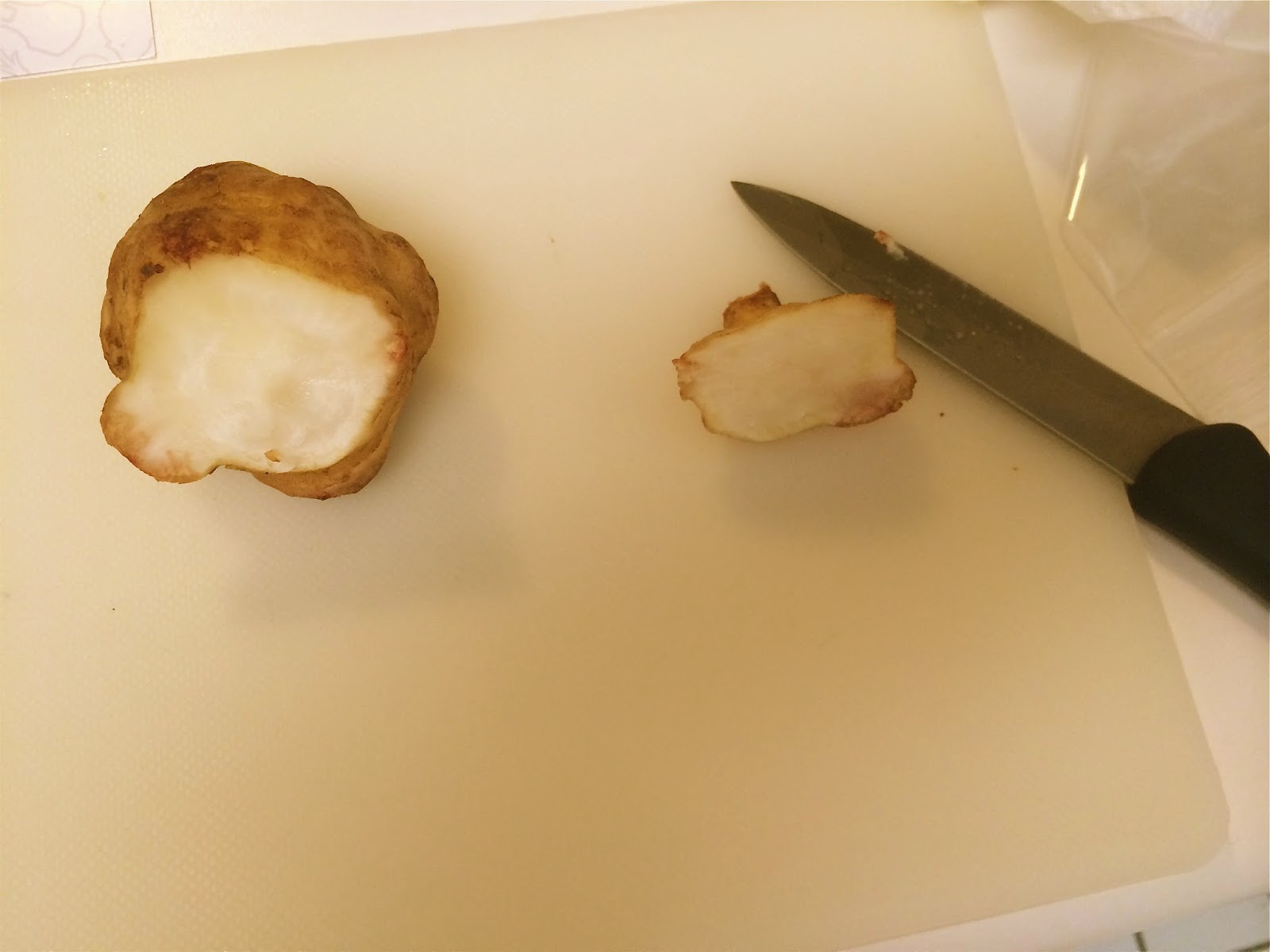 How to choose: Buy sunchokes in season during fall and winter.  You want to choose ones that are firm to touch and free of wrinkles or green or blotchy soft spots.  Before peeling, you can store in the refrigerator for up to a week or two. Even though it's a root vegetable, it doesn't come with all the starchy carbs found in most tasty root veggies, so if you're watching your carb intake for any reason, that could make these a good option for you. 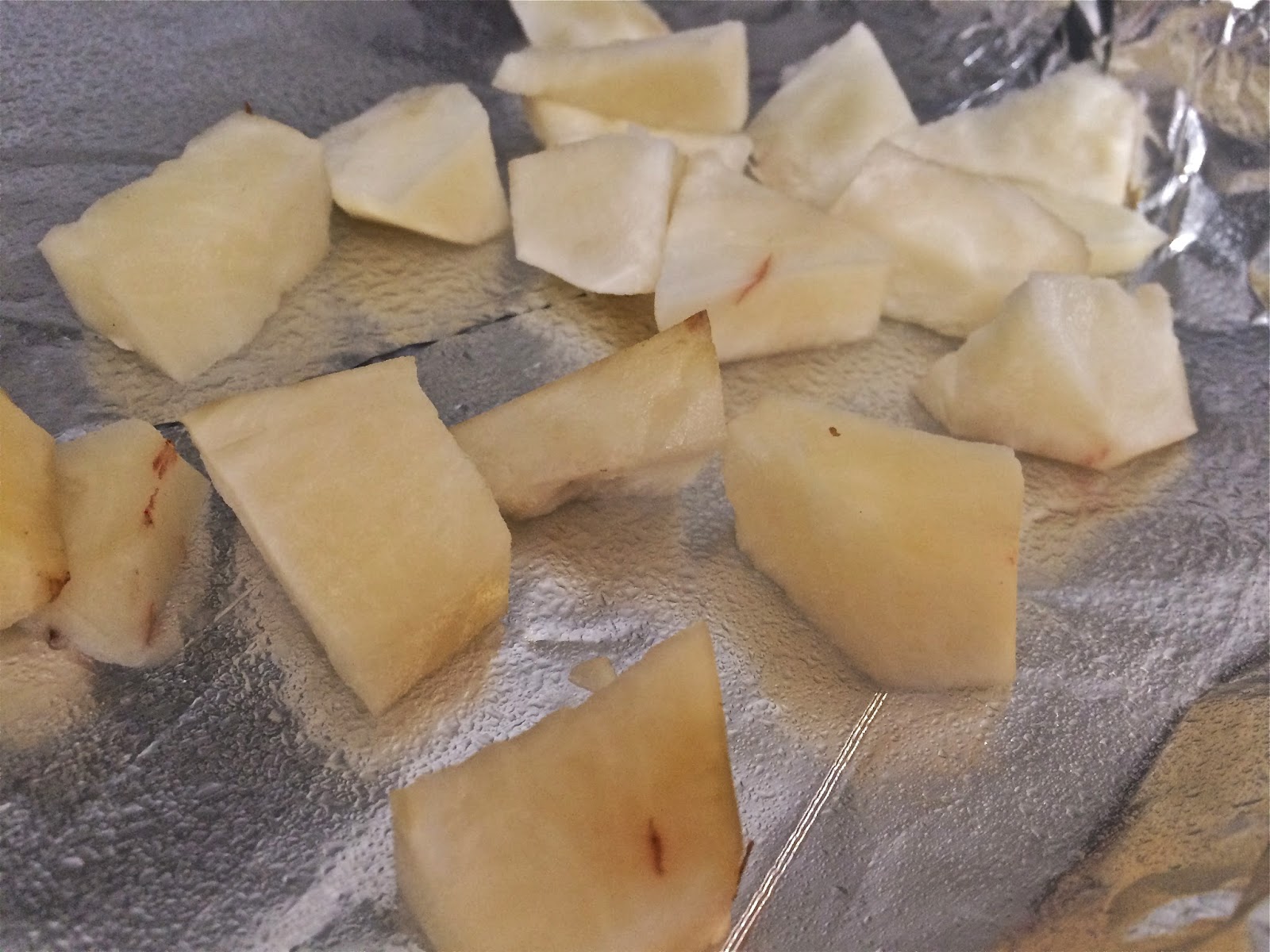 How to eat: After cleaning or peeling, enjoy sunchokes any which way you like! I roasted mine in the oven (seasoned with oil, rosemary, salt, and pepper).   Because I'm still figuring out my new oven's temperatures, they got a little toasty... 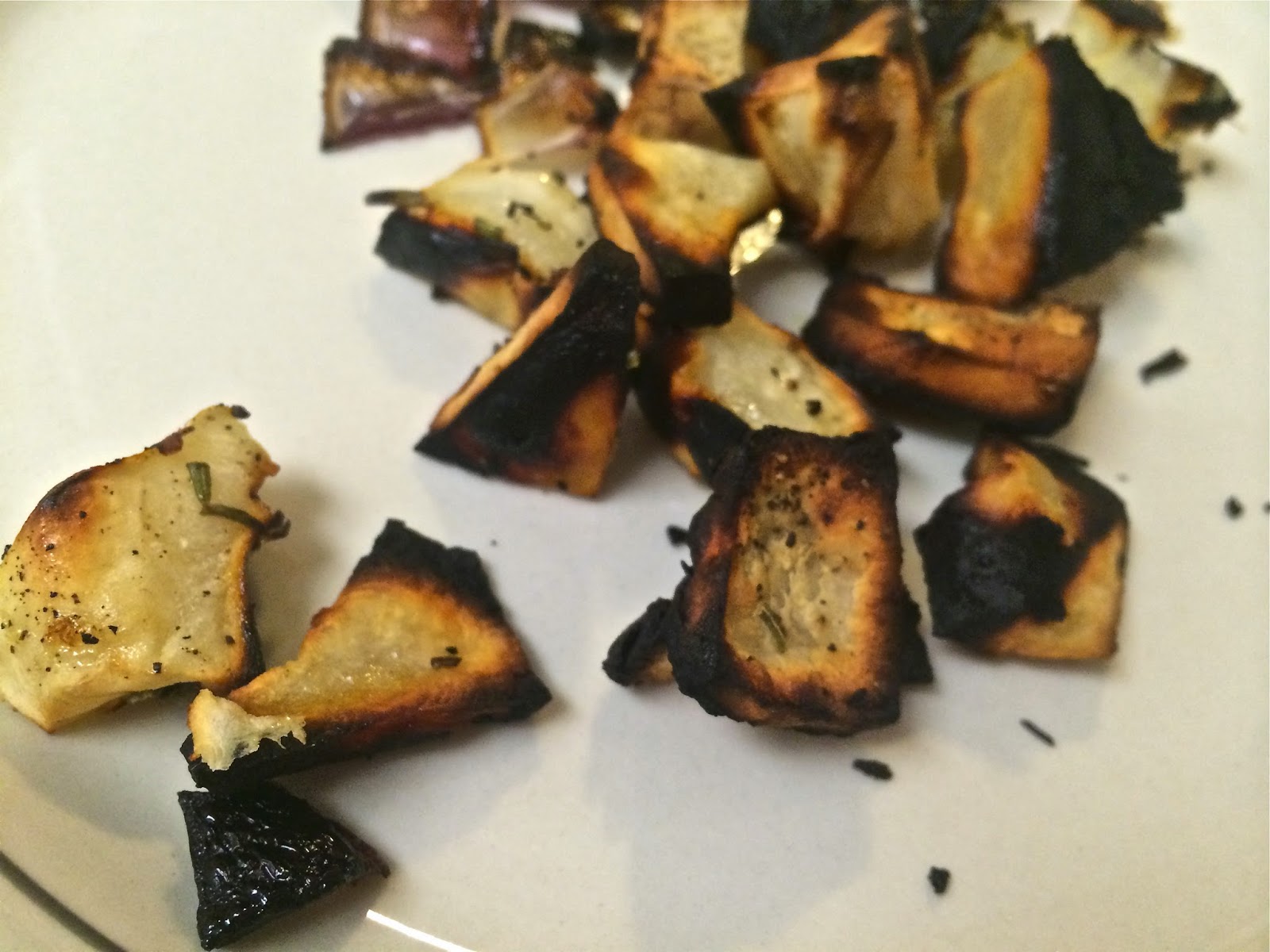 Still, they paired nicely with some juicy chicken for a fancy-looking meal! 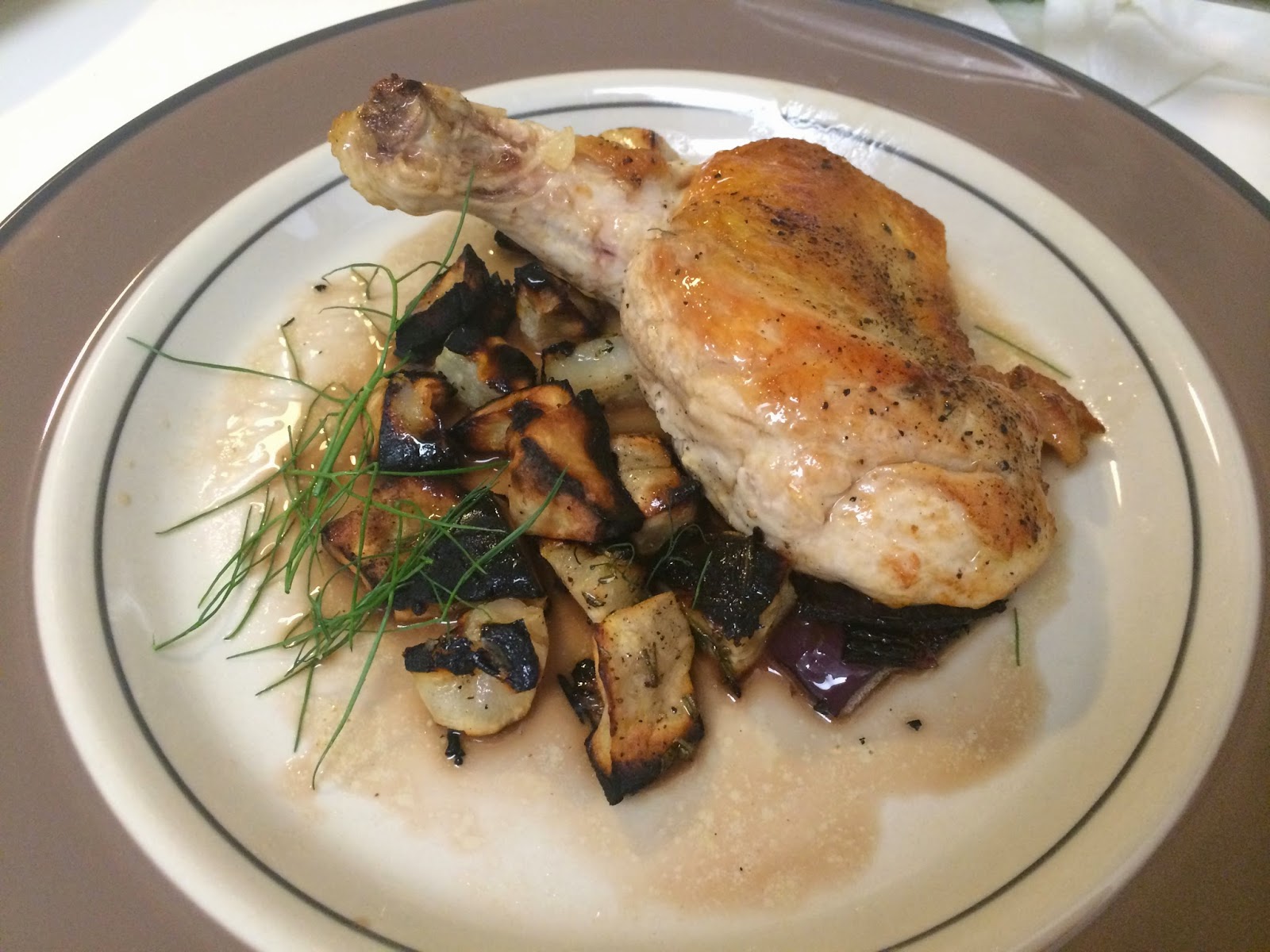 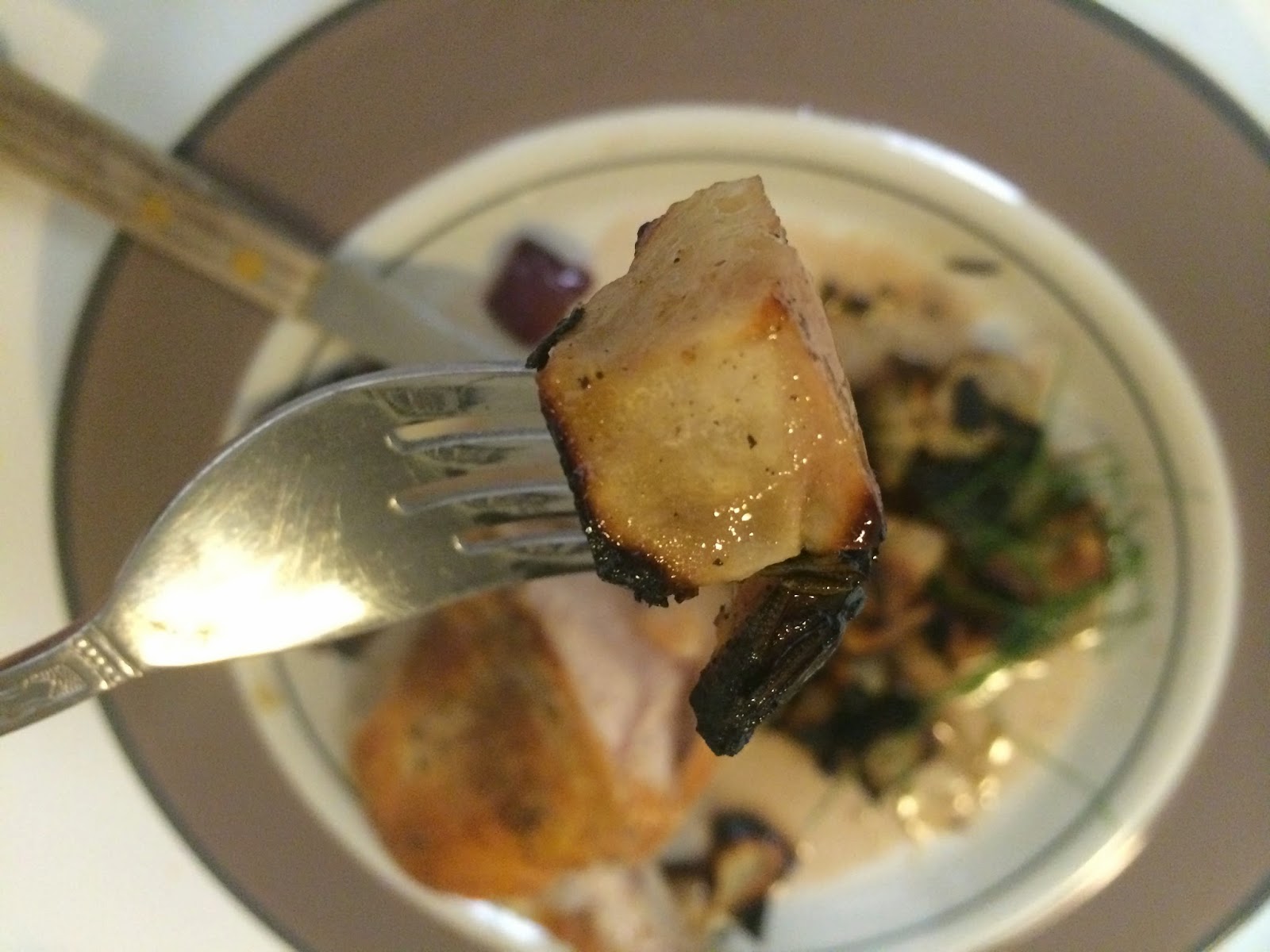 Pretty good!  They didn't have all that much flavor (most of the flavor seemed absorbed from the oil and rosemary), but I ate them up anyhow.  Not bad! I wouldn't say it's my new favorite root vegetable, but it's an option I'm happy to have learned about and would gladly meet again in the future. Have you eaten sunchokes?  If so, what's your favorite way cook them? Sources: WiseGeek, Bon Appetit, Local Harvest, Eat the Seasons, The New Whole Foods Encyclopedia

Email ThisBlogThis!Share to TwitterShare to FacebookShare to Pinterest
Labels: cooking, Health benefits, how to buy sunchokes, how to cook a sunchoke, how to eat sunchokes, Jerusalem Artichoke, new food, root vegetables, sunchoke, vegetables