Happy Friday!  I started writing a "Friday Favorites" post, but I had so much to say about one of my favorites from the week that I'm going to focus solely on... Maleficent premieres today! Woohoo!   My sister, Jessica, and I had been waiting for this for months, so we went to see it on Wednesday (courtesy of Disney), with 3D glasses and supremely high hopes.  The 3D was really cool, especially in the beginning.  The magical "moors" created for the film are beautiful, and the short tour early in the film was truly magical in 3D. The rest of the movie was good, too, and I definitely recommend it for Disney fans.  It was funny, enchanting, and provided an interesting perspective on the Sleeping Beauty fairy tale as we knew it before.   The dark film started off in a surprisingly violent way, with war erupting between two neighboring lands; this was to set the stage for the rest of the film.  A common theme from start to finish was how man's greed led to his downfall.  It wasn't an in-your-face lesson, but the subtle theme didn't disappoint for anyone requiring a "moral of the story". We enjoyed a lot of the explanations behind some of the original "Sleeping Beauty" story and Disney film.  Disney cleverly tied in a lot of features and provided reasons for some of the smaller details, such as why Maleficent has a pet raven. Although I must admit it was not as mind-blowingly amazing as Jessica and I had hoped (unrealistic expectations, perhaps?), we still enjoyed watching the story come to life with a fresh perspective.  The ending did take a slight twist large deviation from the original plot, which we were also less in love with (we're loyal to the original!) but it was sweet and entertaining for a quick 90 minutes. 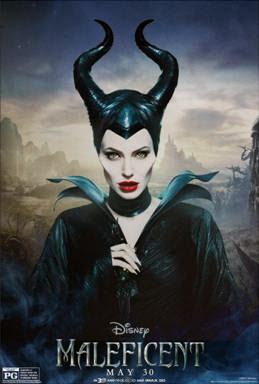 Best part of the movie, above all: Angelina Jolie was positively flawless as Maleficent.  Through a combination of ice-cold stares, deadpan one-liners, and chilling laugh, she was sheer perfection.  Only one person could have pulled off this role, and Angelina nailed it.  Her brilliant performance is reason enough to go see it. The rest of the characters were also well cast, true to their role in both appearance and performance. Elle Fanning was a charming Aurora, and Sharlto Copley was appropriately dislikeable as King Stefan, who he resembled quite well.  The three fairies provided some nonsensical humor on the side, and Prince Phillip was beautifully cast.  We appreciated how Aurora and Phillip were cast young, to look their age (it was only her 16th birthday, after all), and Disney didn't overdo the instant love story between them. In fact, they had a bit of fun with the fairies rushing things along. Then, the whole way home, I was singing "Once Upon a Dream" over and over, still hearing Lana Del Rey's haunting version for the film: A fan of Disney's original Sleeping Beauty?  Then I dare you to go see Maleficent!   And have a great weekend :) Are you a Sleeping Beauty fan?  Will you be seeing Maleficent?