By Meredith - May 16, 2012
Last night, I had the honor of joining Bob Harper to celebrate the launch of his new book, The Skinny Rules.

In keeping with his expertise demonstrated on "The Biggest Loser," Bob wrote a book to help people lose weight.  It includes the "simple, nonnegotiable principles for getting to THIN."  I was interested to see what sort of 'rules' Bob would include, so the opportunity to attend the launch and learn more about the book could not be passed up. The event took place in LAFCO New York's Santa Maria Novella shop, a luxury articles and fragrance store.  It seemed a bit odd at first, but the scents won me over as soon as I stepped inside.  The candles and such also provided a unique atmosphere, and I decided it was a neat place to have a party.  I'd later learn from some "Biggest Losers" (keep reading!) that Bob loves this place, so it's no surprise he chose it for his venue. 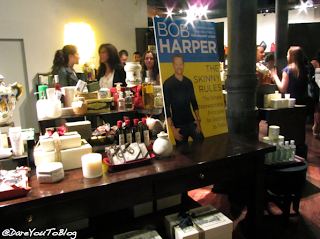 For the first hour or so, there was no sign of Bob, but the place grew more crowded.  Cocktails were served and small bites passed around, including... - Egg salad on rice cake (left) - Cauliflower, truffle oil soup (right) - Spinach-ricotta balls (bottom) * Winner! - Banana dessert bites (unphotographed, but delicious) 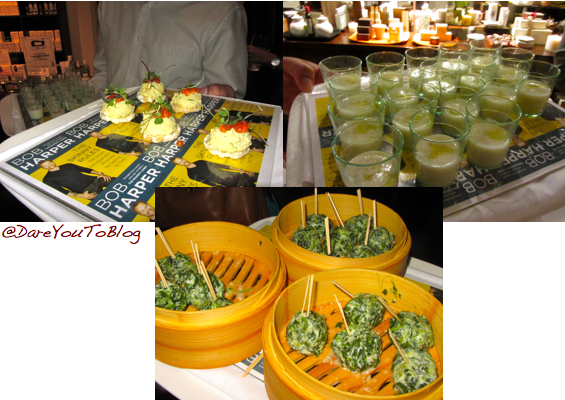 During this time, I reunited with some #FitFluential Ambassadors, several of whom I met last week at the FITNESS Meet & Tweet event. We talked blogs, Bob, Biggest Loser, and the fragrances surrounding us. 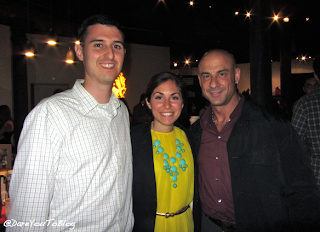 I saw some familiar faces walk through the door, and couldn't resist greeting them.  Olivia (below, right) was the winner of Biggest Loser Season 11, and her sister Hannah (below, left) was a runner up.  Theirs was the first season of BL I ever watched, and, as I told these lovely ladies, they cracked. me. up.  They were hilarious in their interviews, always knowing how to make a ridiculous situation humorous.  I was glad to learn that they were both SO kind, friendly, and funny in 'real life', too. I asked Olivia how her life has changed the most since BL, aside from the obvious weight loss.  She responded that now, she is not afraid and doesn't sell herself short.  Instead of thinking, "I can't," she believes that she can try and do anything!  This resonated with me, of course.  That's what Dare You To is all about! Then Hannah, positively stunning, smiled at me and extended her hand to introduce herself.  She also introduced me to Jenna, Fitness Editor at FITNESS Magazine.  We talked a bit about last week's event and what a blast I had!  I also got to meet Norah--sister of Olivia and Hannah--as well as their friend Jim, owner of CrossFit 212 in Tribeca.  (Makes sense, given Bob's recent obsession with CrossFit!)  I was interested in chatting with him and Ben--Olivia's husband--learning more about CrossFit and discussing the associated "paleo" eating. 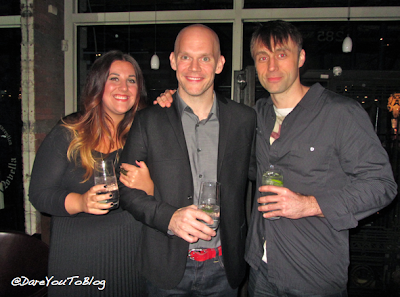 Soon, Bob made his entrance, and after quickly hugging the Curlee girls, made a beeline for his agent.

Bob made a nice speech, thanking all those who contributed to his book.  It was fun hearing him in person, that Tennessee accent as true as heard on TV and radio. 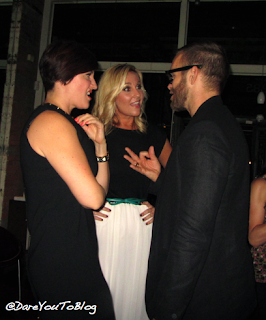 He then proceeding to make his rounds through the room, of course stopping to chat with his gals (Olivia and Hannah, above), and with Ben (below). Bob actually credits Ben as the inspiration for The Skinny Rules, because while Olivia was off at the BL Ranch, Ben was at home, losing about 100 pounds!  At home!  On his own!  No ranch!  How did he do it? 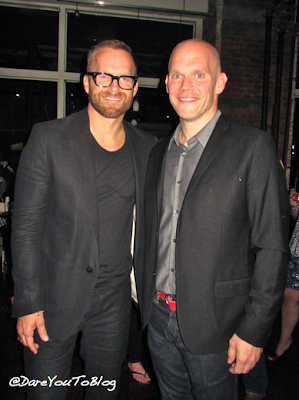 He followed Bob on Twitter.  Bob shares great tips, tweets meals, workouts, etc.  Following Bob made Ben feel closer to his wife while she was away, and as a result of abiding by Bob's tweets, Ben accomplished astouding weight loss.  (Doesn't he look GREAT?) This helped Bob realize that people need a simple, straightforward set of rules--principles--to abide by, which he would outline in The Skinny Rules. Several others in the room had also shed quite a few pounds.  In fact, many of the FitFluential Ambassadors are (or started out as) weight loss bloggers.  So when Cat (below) shared this information with him, Bob was overwhelmed by the bloggers and the impressive weight loss in the group. 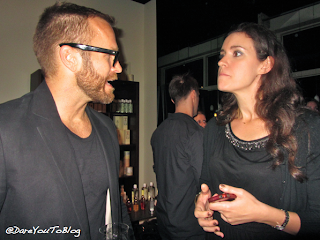 "Tell me more about these numbers!  And how much did you lose?  And you?  And you?" (I was flattered and flabergasted when he got to me and then said, "Oh, not you, you're a little thing, never needed any.")
He congratulated those successful stories in our group, and professed love for the bloggers.
When Alfonso of Angry Trainer Fitness introduced himself, Bob's reaction was priceless.  Understand that Alfonso has posted some rather critical thoughts about "The Biggest Loser" (see here, for example) with many points I strongly agree with.  (However, he DOES admit to liking Bob. "Who doesn't love Bob?")
When Alfonso introduced himself, Bob's mouth dropped open and said, "YOU?! YOU'RE the Angry Trainer??" 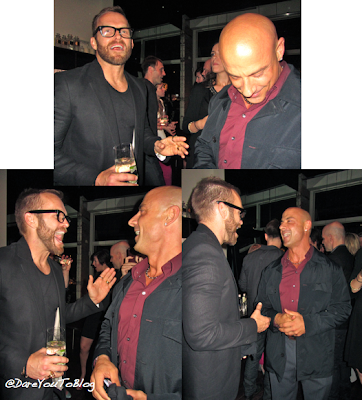 Bob was thrilled to meet him, saying he respects Alfonso for his opinions.  You can read Alfonso's recap here. In many ways, I agree with with ATF; I'm fairly mixed on the show, and do often disagree with where producers choose to place the emphasis, as well as the obvious promotion of brands that pay for airtime, rather than equally or further promoting the foods without PR budgets: whole fruits, vegetables, animal proteins, nuts, etc. ...But I do love Bob! (And Jillian!!)  What I love about Bob, even on the show, is that he puts himself out there in order to reach the contestants.  He will jump off of buildings or reveal his inner struggles if it will help a contestant conquer their own fears and see the value in themselves. 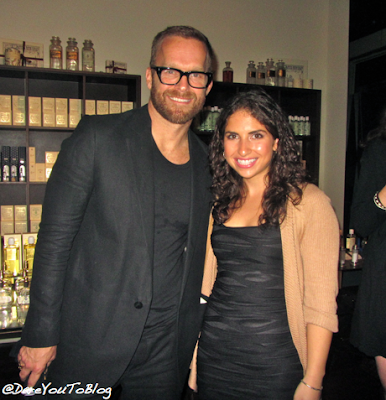 For this reason, I was proud to meet Bob Harper, and couldn't wait to read his new book. When we first met, I became a gushing rambler (who knows what I said), but later Bob was kind enough to answer the question I truly wanted to ask: Bob, I know you're loving CrossFit... What about "Paleo" ?   We all know that Bob lives for his morning oatmeal, but he admitted that he IS otherwise adhering to paleo principles, and reports feeling stronger and performing better as a result. (But! he says, could be the oatmeal, too!)  INTERESTING!  I'm excited that someone as influential as Mr. Bob Harper is catching on to what may be the most beneficial diet/lifestyle we've got going, and is gaining momentum by the minute. (Note: This is NOT the diet shared in The Skinny Rules, which so far seems to incorporate some general paleo-like principles, such as eat animal protein and limiting refined grains and flours, but includes suggestions with many foods that are not grain-, dairy-, or legume-free.) ----- Then, he snuck out, no doubt to celebrate some more.  My #FitFluential friends and I continued bonding and prepared to leave, ourselves.  It was great getting to know Amanda (who it turns out I go to school with!) and her sweet friend Kristin. 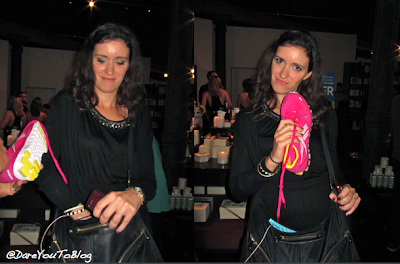 A true fitblogger, Cat pulled her new Reeboks (from #FitBlogNYC) out of her bag. And Alfonso... 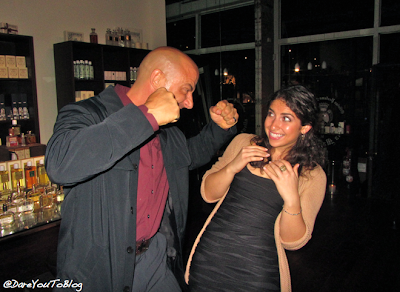 Just kidding.  We got along great :) It was really fun to meet the warm, friendly guy behind the Angry Trainer website.  (Hope I don't ruin his image, here!) As we left, we received a nice gift bag from the folks at LAFCO who hosted us.

A hat, some bath salts, a scented candle and matches, plus Bob Harper's Total Body Transformation (sweeeeet! I love fitness DVDs!) and, of course, a copy of The Skinny Rules -- signed! 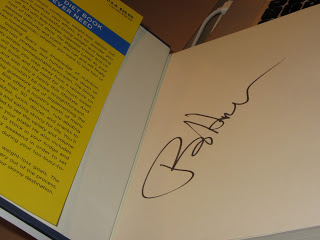 I've already begun reading the intro and the first few rules.  Although I don't typically agree with everything mainstream diet advice has to offer, Bob is hitting the nail on the head so far.  Drink water?  Eat protein at every meal?  Slash intake of refined grains and flours?  ALL are things I agree with.  I'll continue reading and give a full review in the coming weeks, but if you'd like to see what it's all about, check out his introduction on Huffington Post. 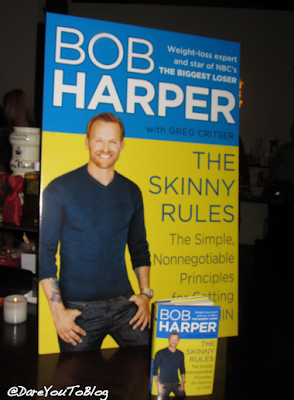 I'm reading it,
and dare you to, too!
Do you watch / enjoy / respect the show, The Biggest Loser?
What about Bob himself? (Say yes, <3)
Have you read the book yet?  What do you think?
Biggest Loser Bob Harper Books Events launch NYC Skinny Rules 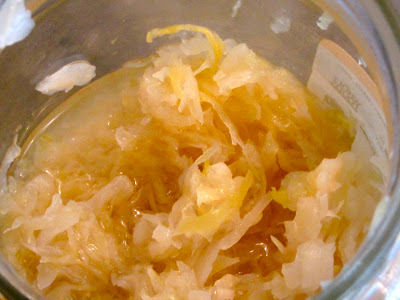 Today, instead of daring you to cook a new food (although that's coming up, don't you worry!), I'm just going to dare you to eat a new food: This is a food that I had nothing to do with growing up.  Never ate it.  Never wanted to.  Didn't quite know what it was.  Didn't care to look past its slimy appearance and pungent smell to give it a try.  No interest whatsoever.In my paleo and general nutrition readings, podcasts, books, etc., I repeatedly find suggestions that Sauerkraut is one of the absolute healthiest things we should all be eating.At Paleo FX (March 2012), a "Whole Foods vs. Supplements Mastermind Panel" of nutritional and digestive gurus (Chris Kresser, Amy Kubal, Diana Rodgers,Liz Wolf, Diane Sanfilippo, Dr. Dan Kalish, Joe Johnson) were all asked toname 3 foods or supplements they recommend.  Guess which food was essentially unanimously agreed upon?  (Hear discussion on that discussion in this Balanced Bites podcast episode.)Presenters at th…
Click to read the rest » ...