By Meredith - July 16, 2012
This week, I took a break in my day to ENJOY -- to catch up with my friend Hannah, who was visiting for a few days.  We went to the movies... But instead of enjoying a film, we enjoyed something I usually bypass at the theater: POPCORN. Popcorn, Indiana, the self-proclaimed biggest snack company that a lot of folks never heard of, kindly invited me to sample their classic and newfangled flavors of popcorn.  Their rep. Jeff explained how at their Englewood, New Jersey factory (and offices overlooking the factory), "We eat, sleep, and breathe popcorn," he explained.  "We view ourselves as the Popcorn Innovators."   It soon became evident that innovation was the perfect word.  Their snacks, flavors, and technology take popcorn to a whole new level.   Read on to learn all about their flavors and innovations: Popcorn: The company was founded on the novel idea that "popcorn in a bag doesn't have to suck."  If that's their goal, then mission accomplished.  The popcorn is downright delicious.  Plus, Popcorn, Indiana popcorn contains 100% natural ingredients and is hand crafted in small batches by artisan kettles.  Sounds good, right?  More still, their popcorn chefs--Chef Dan and Chef Ernie--have developed a record number of flavors.  Popcorn, Indiana's game-changing flavor offerings include: ·       Kettlecorn
·       Movie Theater
·       Aged White Cheddar Kettlecorn
·       Cinnamon Sugar 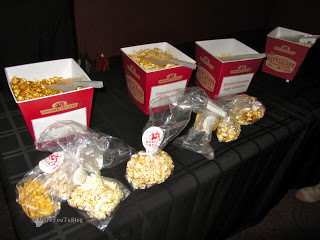 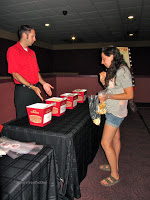 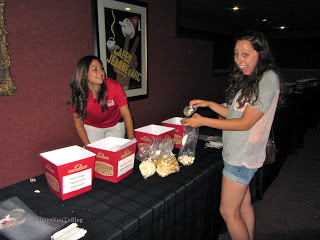 Favorites in the taste-testing?  My sweet tooth had me overindulging on the "indulgences", like Almond Biscotti (So sweet - "It tastes like a cookie!", the rep Amanda told us) and the Drizzled Black & White Kettlecorn. <-- WOW.  Wow. Just... wow.  I also really liked the Original Kettlecorn, which had a nice crunch to it, even if it left my fingers a little sticky. :)  Other staples included Touch of Sea Salt and Aged White Cheddar Kettlecorn.  These had such a nice, subtle flavor to them.  A perfectly light snack! 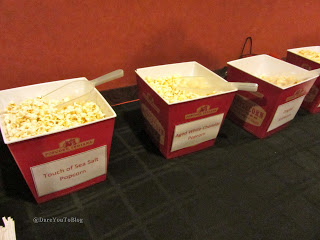 The "Most Creative" awards go to Cinnamon Sugar (ALWAYS yum) and Bacon Ranch. ...I'm not a bacon person, but would you believe me if I told you that the "Bacon Ranch" flavor is vegan?  and certified KOSHER?!  I kid you not.  I almost didn't believe them.  "One of our chefs is vegan," Jeff confirmed. [Edit 9/3/12: The Bacon Ranch flavor is not vegan, as the rep claimed. It is Kosher and gluten-free.] Chips: If all that popcorn weren't enough, Popcorn, Indiana decided to take it a step further, and created a popcorn chip: Chip'ins.   Similar to popular Popchips, these Chip'ins are popped rather than baked or fried, but uniquely, Chip'ins are larger and shaped similarly to tortilla chips.  Plus, you can have 20 chips in one serving, compared to only 9, 10, or 11 of a comparable chip.  These are also special because they come in tasty flavors like.... And they're still nice and natural!  The original sea salt flavor, for example, contains only THREE ingredients: salt, corn, and oil. Boom, chip.  Dietary concerns: For both the popcorn and the chips, the entire factory is certified Gluten-Free, and all flavors that are not "cheese" flavors are vegan.  These snacks also contain no: trans fats, artificial flavors, cholesterol, or preservatives.  Most flavors are already non-GMO, and they're moving into becoming 100% non-GMO. Excellent. After convincing us how delicious their snacks are (not that it took much convincing), the Popcorn Team demonstrated their next innovation, a technology that will change your at-home movie nights forever... Microwaveable snack bags:  Not the tiny, folded, greasy paper bags we've all come to know and deal with, but a real, sizeable snack bag that goes right into the microwave for warm, freshly popped, hand-crafted popcorn.  Most snack bags, like those for chips and already-popped popcorn, come with a metallized film lining.  This metallic lining, of course, prevent those types of bags from being warmed up in the microwave.  ... But not this one!  Popcorn, Indiana's new technology makes their at-home popcorn bags--Movie Theater Popcorn--microwaveable.  It's the same all-natural, hand-crafted kernels, popped at home to be served fresh, warm, and flavorful, right on your own couch. They popped it in front of us.  30 seconds.  Ready to eat.   It really tasted delicious, and was NOT smelly or greasy like the microwaveable popcorn I've had in the past.  I rarely make popcorn at home, but if I had this stuff handy?  I'd heat it up regularly and make an evening out of my television and movies.  ... or just regular snacking-while-working, as I tend to do.  I'm excited to add this to my smart snacking stash! Salty, sweet, crunchy... Popcorn, Indiana hits the spot. Dare you to keep an eye out for this brand, because they've got big things coming our way!  In the meantime, find them at these stores and try their many flavors for yourself!  Let me know what you think :)
What's your favorite flavor of popcorn?  Would you dare to try these bold varieties?
Events gluten-free popcorn product review snack

Get a Fresh Fall Start with Gaiam TV's Fitness Videos

By Meredith - September 10, 2012
I dare you to get a fresh start this fall with Gaiam TV.   I know I will! What is Gaiam TV?Gaiam TV is the first streaming fitness video subscription service designed to reach those interested in health, wellness, yoga, fitness and personal development.  With over 2,000 titles, Gaiam TV is like Netflix for health, wellness, yoga, and fitness lovers, delivering hundreds of hours of online yoga, Pilates and cardio workouts.  Gaiam TV viewers can practice with top instructors like Rodney Yee, Seane Corn, Jillian Michaels, Mari Winsor and Kathryn Budig. Wow, sounds great, right?  Last week I dared you to work out without a gym, and here is just the tool you need to get your fitness on at home. Is it as good as it sounds? I first turned to Gaiam TV on an early morning before a very important day.  I wanted to do some invigorating yoga, but knew my mind wouldn't be in it for more than 15 minutes. The site allowed me to to filter my search for an "AM/PM Style" with a time of &quo…
Click to read the rest » ...

By Meredith - October 02, 2013
Guess what day it is... Yes, it's hump day.  But today is also... KALE DAY!  Mm hmm, you heard me.  All who eat their greens, REJOICE: Wednesday, October 2, 2013 is slated to be the very first  National Kale Day! Happy Kale Day! Although, I admit, it's not my favorite green (I can understand why some loathe its bitter taste), I do try to eat kale from time to time.  In fact, kale has been featured as a "new food" right here on the blog!  Check out Cook with a New Food: Kale for that post.  Since then, I've come around to it.  Prepared properly, kale can be quite a delicious addition to any meal! Now, it's time to pay kale some serious attention!  The folks at NationalKaleDay.org "propose that National Kale Day will be the first Wednesday in October and will continue to be an annual celebration of eating, growing, and sharing kale through out [sic] America."Dare you to celebrate this inaugural Kale Day by having some Kale for yourself. Whatis kale? It…
Click to read the rest » ...