Look for the Good

There are simply no words to address the cruel tragedy that took place on Monday, April 15, 2013.  What should have been a joyous, triumphant day was instantly transformed into a nightmare. However, I was warmed to learn about all the brave, warm-hearted, generous individuals in Boston who immediately responded to the crisis: running in to carry injured away, racing through the finish line and directly on to the hospital to donate blood, opening up homes and restaurants to those in need of a meal, a shower, a computer to contact loved ones, or a place to stay. A Mr. Rogers quote was floating around Facebook and the Twittersphere the following day: "Look for the helpers. You will always find people who are helping." And this is just what we must do to stay sane, to overcome fear, and to keep looking up.  I personally suffer from mild anxiety, and events like this spark a great fear inside me.  The only way to quell this is by focusing on the good that emerged from the rubble. Another quote, originally stated as applying to literature, came to my mind:  "Evil often triumphs, but never conquers."  On Monday, an evil certainly saw a minor victory, claiming 3 lives and injuring over a hundred, but in no way did it win.  The marathon runners and spectators, Bostonians, Americans, refused to be conquered. This is evidenced by this awe-inspiring video from the Bruins-Sabres game, where the strongest singing of the National Anthem I've ever heard took place.  Rather than half-heartedly listening and eagerly waiting for the game to begin, the Boston-based crowd joined in with booming voices. My reaction, every time, is tears---pride streaming from my eyes.  We will not be conquered.  We are united.  There are always helpers.  There is still plenty of good in the world. I dare you to focus on the good.  Look for the helpers.  Take heart, and have faith that there are always people doing good. 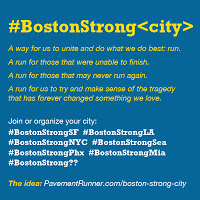 Online, runners have showed off their marathon shirts and running sneakers in support of the Boston Marathon participants and victims.  People have been tweeting with the hashtag #RunforBoston and others, again proving that we will not be conquered. Pavement Runner wants us to run, together, one week after the Boston Marathon Bombing.  He set up a page where you can connect to others in YOUR local city together on Monday, April 22, and RUN, united and strong. Click here for details and to join in. You can also log miles that you #RunForBoston here.

Want to donate to help those affected by the tragedy?  Many are stuck not only with hospital and rehabilitation bills, but also suffer the loss of their career due to limb loss.  Learn how you can donate here, and learn more about The One Fund. Update 6:35pm: Just learned that Active Accessories is also selling Active Hair Band Bracelets, and, for the next month, $2 of every set sold goes to benefit those impacted via The One Fund.