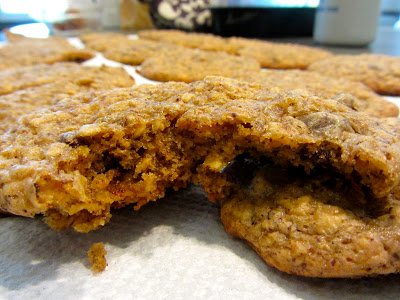 After my first April Adventure getting funky in Zumba class, I kind of took a hiatus from adventuring. Last week just flewww by, but now I'm back and ready for another adventure! This week, I experimented with gluten-free baking! Granted, I already did some paleo baking with almond flour (which is also GF), but this time I took a regular cookie recipe and swapped in new, never-before-used-by-me ingredients: The recipe called for rolled oats, so I was thrilled when I happened upon this gluten-free variety! I know what you're thinking. Beans? In a COOKIE?? I was a little nervous, too, but I chose this as my flour (rather than, say, corn flour or rice flour) because Chocolate-Covered Katie uses chickpea and white bean (and I think even garbanzo!) beans in so many of her healthy, vegan desserts.  And she is AWESOME. Today's recipe, however, called for regular ole whole wheat flour, of which I'm usually a big fan. I was inspired (dared) by My friend Rachel, who has a b…
Click to read the rest » ...
More posts