A few weeks ago, I was invited, as a FitFluential Ambassador, to attend a fitness class led by celebrity trainer Brett Hoebel. Brett Hoebel, also known as "El Capitan," is the founder of Hoebel Fitness and a trainer on NBC's The Biggest Loser season 11.  His online bio explains how his "mind-body" approach comes from his experiences in both Eastern and Western disciplines, combining his educational background (dual major in psychology and biology, plus biomedical science courses) with his martial arts training in capoeira and Muay Thai kickboxing.  With 15 years in the field, he's become an expert in group fitness, weight loss, and personal training. We met at a New York City 24 Hour Fitness for the evening class.  As a small aside, I have to mention how impressed I was with the 24 Hour Fitness facility.  It was clean and spacious--two things I've learned not to expect from NYC gyms.  Definitely a place I wouldn't mind traveling to to work out! Downstairs, beyond the endless strength training machines and areas, was one of two class rooms.  When I spotted fellow FitFluential Alfonso in one of them, I knew I was in the right place!  I was also pleased to reunite with several members of the Greatist team, including founder and CEO Derek Flanzraich and growth director Laura Schwecherl.  I'm also a proud Greatist Ambassador, so it was nice to meet some other members of the team, too. But, there wasn't much time for catching up!  Soon, Brett was front and center and the workout was on its way! Beginning with some dynamic stretching, Brett first led an intense 20-minute capoeira-inspired workout, part of Brett's upcoming "20 Minute Body" online workout videos.  Capoeira is a Brazilian martial arts program. I hadn't been familiar with the term, but some of the moves were things I did (and loved) from other kickboxing-style classes.  Balance and power are how I would describe it, and LOTS of legwork.  These 20 minutes were just plain awesome.  I wanted to stop and record some video for you, but I didn't want to miss a second of this workout!  It had the non-stop pace of fitness classes that I love so much.  I didn't dare stop to reach for my camera until it was over. After a short breather and sip of water, we moved on to a 4x4 workout.  This is four moves, four times through, with only a short break between sets, for a total of 16 minutes.  All you need is your body weight and a 4x4 space.  The moves were focused and definitely burned. At one point, Brett skipped a move and went back to it after.  He admitted, "I know I went out of order. I'm drunk off lactic acid... My bad." :) Like I said, it burns. A glimpse at the workout: I'm pretty sure I couldn't feel my legs the next day. ...But that didn't stop me from accepting an invitation to round two! 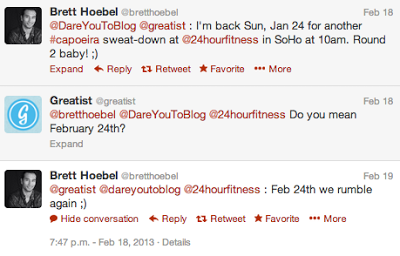 Of course, I said, "Count me in" and marked my calendar! So, this morning, I made my way to a different 24 Hour Fitness location to be led, once again, by El Capitan.  This class would be a slightly different workout, one called "Nitro," that did also contain many similar martial-arts moves.  It was more similar to the "20-minute workout" part of the previous workout in that it was nonstop, heart-pumping, leg-burning capoeira-inspired moves.  In other words, pretty awesome and right up my alley. The "Booty Time" (aka "drop and do squats until Brett decides to end the torture") intervals were less lengthy than in the 20-Minute Body workout, which was somewhat a relief, but there were plenty more ginga moves included to work the legs, and squats were incorporated into other moves throughout the workout.  Plus, there were no breaks. Just move, punch, squat, lean, jump, turn, repeat.   The awesome music just made it feel like we were learning a fun dance routine, if the dance routine was a kick-butt martial arts workout.  After both workouts, I was sweating and reaching for my water.  Fun and effective, this is definitely a workout I'd like to do regularly! Thank you Brett and 24 Hour Fitness for introducing me to capoeira!  Hope to see you back in The Big Apple soon. Dare YOU to try a martial-arts workout!  Check out Brett's website or classes at your local 24 Hour Fitness.