We are jumping from one awesome workout to another!  The winner of last week's DMF Giveaway is Angela! She commented:
Congrats, Angela!
Moving on, from booty-shaking to booty-blasting at Barry's Bootcamp in New York City. Last week, you may have noticed some Tweets and Instagrams showcasing this kick-butt workout. Here's what went down:
I was pumped to try out Barry's Bootcamp for the first time this past week at a media workout sponsored by Chobani.  I'd heard of Barry's Bootcamp before, but really had no idea what to expect.  It was my very first bootcamp class, so I was a bit nervous going in!  All I knew was to expect strength AND cardio in one intense workout.  And that's just what we got.
The Barry's Bootcamp location in TriBeCa (one of many locations worldwide) was pretty impressive.  In the entryway, there was a small cafe/smoothie bar with various offerings.  In the bootcamp... studio? gym? giant room of equipment? we rounded up to get the party started.

The large group was split into two; we either hopped onto a treadmill OR stationed ourselves at a stepper with weights.  We would switch places a few times throughout the workout.  I arrived just in the nick of time, so I only had a moment to say hi to Alec of PopFitLife, whom I'd planned to come with, before she started running and I started squatting. 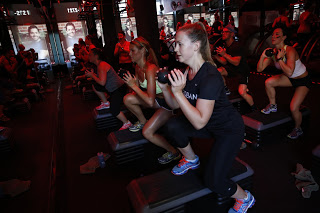 The countdown began, the music blasted, and our esteemed trainer Natalie Raitano began shouting instructions.  The energy was certainly high; it was a great atmosphere for a serious sweat. 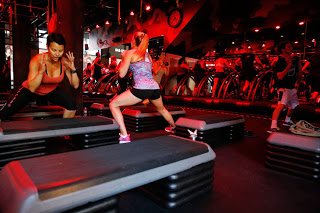 As the treadmillers ran--sprint and recovery intervals, climbing uphill at 0, 5, 7, and up to 10% incline, those on the floor squatted, lunged, did some fancy work with a resistance band (many of us struggled with that, but perhaps it takes practice), and basically challenged our legs in every way possible.  Apparently, this was a "leg day" at Barry's Bootcamp, because between the floor and the treadmills, our legs turned quickly to jelly. 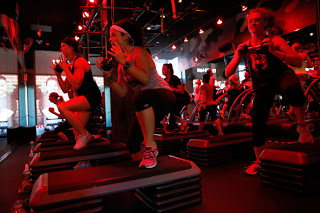 Each round was about 10 minutes, and there were four rounds, so we were twice on the floor and twice on the treadmill.  Each time she counted down those final seconds, I was thankful for the switch. Continue on to read how it went: 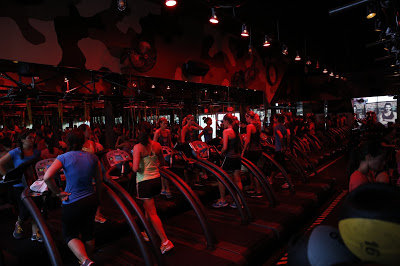 Because both groups were working out simultaneously, Natalie also had to give the instructions simultaneously.  She'd shout instructions to the treadmills to take it up to X speed or Y% incline, and then show the floor the next move.  She'd count down the finish for the sprint and tell the treadmills to recover, and then cheer on those lunging beside their steppers.  This back-and-forth was a little confusing at first.  Who is about to recover?  Who is she counting down for?  That's the one thing I didn't love about it, but, then again, it was only my first time. 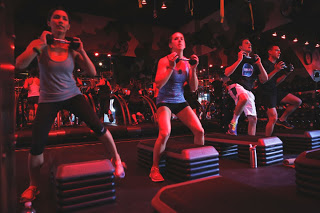 After a while, I started to catch on to her cues better, but it was still unsettling for a while.  I'm sure that Barry's regulars are accustomed to this and have no trouble discerning one instruction from the other. One thing is for sure: The alternating format was effective.  We definitely worked up a sweat!  Plus, there is ZERO time to think about anything else than your workout.  The level of intensity and focus was unparalleled. I finished on the treadmill, and was counting down as well.  As great as the workout was, it was a serious challenge and my legs were glad when it was over.  It was well worth it in the end, because we got special treats to reward our hard efforts! 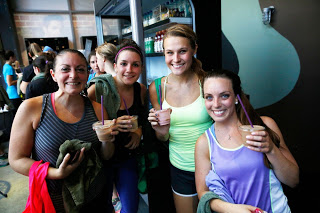 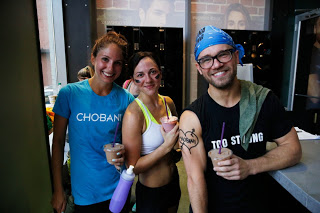 Chobani treated us to smoothies: Chocolate Peanut Butter, and a Raspberry.  Really delicious!!! 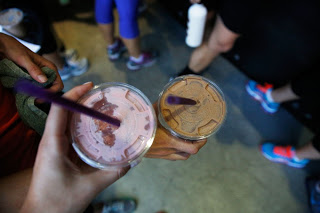 We got to chat, discuss the workout, breathe. I finally got to catch up with Alec and thank our instructor Natalie for the tough workout! I also had the surprise pleasure of meeting Jay and Jen Jacobs from The Biggest Loser Season 11.  It was awesome to chat with them and bond over our NJ roots. 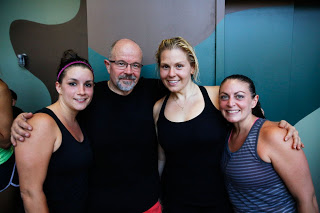 Thank you to the Chobani team for this kick-butt afternoon!   We had a great time!!
Learn more about Barry's Bootcamp here and check out the recipes for these smoothies and more on the Chobani Recipes Page.
Have you done bootcamp classes?  Were they similar to this structure or different?
What do you think of the alternating-groups structure of the workout?
Dare you to give it a try!
--- Like what you see here?  Follow along on Twitter and Facebook! ---