Become a Runner! Part 2: Did I just do that?

In my last running post, I described my childhood aversion to running and my triumph over the mile, and also explained some of the reasons why running is great for you.
So I could run a mile.  Still… why stop there?  Can I go further?  Run longer?  Inspired by several long-distance runners in my life, I set a goal for myself to increase my endurance: I would run a 5k in one year—by the summer of 2012.  That gave me plenty of time to train for it and get comfortable enough to go through with it.  Then, in October, I saw an advertisement for a 5k in town, just one month away.  Should I do it?  Should I just sign up and commit? Even if I stop and walk, and it takes me longer than everyone else, it would be a starting point to inspire me and to learn from, right?
To see if I was ready, I did a treadmill test.  Running at an average of 6 mph, sometimes faster and occasionally slowing to 4 mph, I reached my goal in 30 minutes and 4 seconds.  That’s a ten-minute mile each.  It’s not a fast or competitive time, but who cares?  Look how far I’ve come since my teenage years!
Elated, I decided I was ready. I registered, I committed, I told my family and friends: I was going to run a 5k!  Alright… fine… but running outside in late November would not be the same as running on the treadmill.  There'd be cold air, wind, and hills, and I wouldn’t have buttons allowing me to control my pace and see my progress.  Surely, that would all slow me down, or so I told myself. 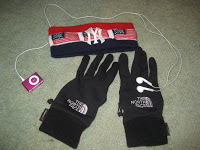 Two weeks before the race, I measure out three miles in my neighborhood, suit up with Underarmour, ear warmers, and gloves, and set out with a playlist that is 31 minutes, 34 seconds long, so I would know how far I was from my goal time.  Off I go, up and down the same street.  I transfer hair ties from one wrist to the other to keep track of how many times I do the lap. Even though it’s cold, my body quickly heats up; I even take off my gloves and hold them the rest of the time.  After a mile and a half, I allow myself small walking breaks between songs—a brisk recovery walk only, no more than 10 seconds, until the next song pours into my ears.  Running the last stretch back toward the starting point to complete 3 miles, the music stops.  Twenty feet short of the 3-mile marker, plus the extra time for the 1/10 mile in a true 5k, it’d be just another minute longer than my pre-set playlist… I figure this out in my head while walking, relatively pleased with myself, toward the corner.
But then, magic happens.  Another song begins; the playlist was not over!  I ran three miles, outdoors in the cold, in under thirty minutes.
WHO AM I???  Did YOU know I could do that??  I certainly didn’t!  Shocked, smiling, and so proud, I walk back up to my house, with Mika’s “We Are Golden” streaming through my headphones.  Yes, I AM golden!  Look at what I just accomplished!  I may be wheezing and sweating and just about ready to collapse, but I ran three ten-minute miles.  WOW.  I couldn’t stop smiling.
Committing myself to a public goal gave me the motivation to push my body further than my mind thought it could go.  I learned not to let my mind inhibit what my body is capable of, and I dare you to do the same—in running, in fitness, in life.  What are you afraid of?  What are you holding yourself back from accomplishing?  Running, painting, singing, writing a book--or a blog?  Take a breath, dare yourself, and go for it!!
Stay tuned to see how I perform on a new route, in public, in my very first 5k race!