Psst, did you enter The Calorie Myth book giveaway yet?  Click here to learn more about the book that is released today.  With 2014 beginning, so too begin many New Year's resolutions and goals.  What are yours?  Are they "SMART"? As a refresher, S.M.A.R.T. goals are...
Whatever the topic of your goal, making sure it's "SMART" will help you make it a reality.  Learn more in my original "Set Smart Goals" post.
What are your goals for 2014?   Other Dare You To tips for your resolutions:
Personally, I'm looking at a few focuses for the new year.  I admit they don't quite fit the paradigm above, but I'll work out details soon. For now, I've got some big-picture ideas to work on. Thanks to new opportunities, the time from January - May will likely be an exciting but stressful time for me. For this reason, I'm aiming to intentionally not place additional stress my mind or body while I'm stressed enough as it is. With that in mind, my coming focuses are:
Any tips for me on these aims?  Great apps or tools you recommend?
What are your goals for 2014? Any good dares?
Happy New Year!!!
14 comments:

Free Yourself of The Calorie Myth {Book Review + GIVEAWAY}

Hope those of you that celebrate had a lovely joy-filled holiday!  Now, we're just six days away from the new year, and just FIVE days away from the release of a new book that can help you achieve your health goals for the new year. I've said before that I'm a fan of the work of Jonathan Bailor and listen to his podcast frequently.  When I heard he was publishing a book that would contain all his well-phrased findings in one package, I was eager to learn more and share it with all of you.  I contacted Jonathan with an offer to review his new book, and was so excited when he agreed to send over an advance copy!  Now I can tell you all about it, just in time for you to pre-order before it is released on December 31. His new book is a complete guide to all the science he has uncovered independently, seeking to find the most proven path to health and fitness.  Now, I dare you to free yourself of the calorie myths by reading Jonathan Bailor's new book:
"About almost any subject, there are the facts 'everyone knows'
and then there are the real ones."
- Ernest G. Ross, quoted by Bailor, Ch. 21
The Calorie Myth is the myth--or the set of myths--that have been propogated by popular media, medical professionals, and government recommendations, claiming that the most (or only) important factor in your health and weight management is counting calories.  The myth holds that if you eat the right amount of calories and burn the right amount of calories, you can achieve your dream body and attain health.  This has resulted in obsessive calorie-counting, severe food restriction, and even unhealthy starvation. Jonathan Bailor is here to free us of this myth and give us our lives back.  If calorie-counting is the answer to achieving health, then why have we gotten fatter and sicker ever since the calorie has become so widely understood?  What has gotten us to this world in which children now have a lower life expectancy than their parents?  HOW can we reverse the trend and reclaim our health?

Who is this book for?  The main market for this book is probably those who have been yo-yo dieting for a long time, not seeing the results they want from calorie restriction, but a wider audience could certainly benefit.  What's important to note is that the focus should be on HEALTH, and weight loss will follow naturally.  I'd hold that even those who already eat a real-foods diet can benefit from reading this.  It is great to be reminded why you eat the way you do, and to collect knowledge that will help you explain your lifestyle to others (or to give as a gift).  It's also good for anyone who claims they know calories aren't all that matter, but hasn't fully, truly embraced the mentality.  He uses science to bust "The Calorie Myth" and provides a more efficient, more enjoyable route to health. Read on to learn more about what's inside the book, and for a GIVEAWAY!
Click to read the rest » ...
16 comments:

Everyone knows that the best remedy for any malady is a nice warm pot of soup.  It's ancient wisdom. (Or Grandma's.) So... If it's so good for us, why don't we eat this healing food all the time? Wanting to absorb of all this nutrient goodness for myself, I added "Make Bone Broth" to my Dare list.

Let me preface this by saying that I am a big fan of the old Disney classics.  I grew up a "Disney Princess," if you will, so I have high expectations for animated Disney movies. Disney's latest princess tale, Frozen, did not disappoint!

A few weeks ago, I was invited to an advance screening of Frozen, although I was under no obligation to blog about it at all.  As soon as the film ended, I gave a strong applause and immediately texted my nearest and dearest insisting they see it as soon as it comes out.  Now that it's been in theaters a week already, many of my friends confirmed that they enjoyed it as much as I did. I absolutely adored Frozen, and I'd gladly see it again!  This musical comedy is hilarious, contains a song performed by Idina Menzel that blew me away, and is entertaining for adults (even my male friends enjoyed), yet appropriate for children. The cast includes some of my favorites, including Idina Menzel, Jonathan Groff, Kristen Bell, Josh Gad, and more. Here are a few teaser clips, but get to theaters to see the show with the whole family! Some of the songs were spectacular, and some were not quite as memorable, but "Let It Go" is a new favorite for me.  If you want to see that before hitting the theater, watch below: Another fun part of Frozen was that it did away with the overdone and outdated conclusion where it is the man that saves the helpless princess.  I don't want to give anything away, though, so see it for yourself to find out how Disney has updated the road to Happily Ever After. The movie contained laughter for the most part, and some tears near the end.  It's got something for everyone, so I DARE you to go check it out this holiday season! PS: I highly recommend seeing Frozen in 3D, if for no other reason than to see the animated short that is played before the movie begins.  Yes, the movie itself made good use of 3D as well, but the Disney animated short entitled "Get a Horse" is out of this world.  It's a cute cartoon involving Mickey and Minnie that is, yes, funny, but more importantly is the epitome of what 3D animation should be used for.  I'd include a clip of it here, but it's simply not the same to see it on your computer.  You MUST see this in 3D!! Did you see Frozen yet?? What did you think? HOW AMAZING WAS THE ANIMATED MICKEY MOUSE SHORT?!!?!

have a paleo Friendsgiving!

Hope everyone had a happy Thanksgivingkah!  I had a very nice long weekend visiting with family and taking a short breather from work. The Saturday before Thanksgiving, a lovely group of paleo NYC ladies got together for a...
Paleo Friendsgiving! 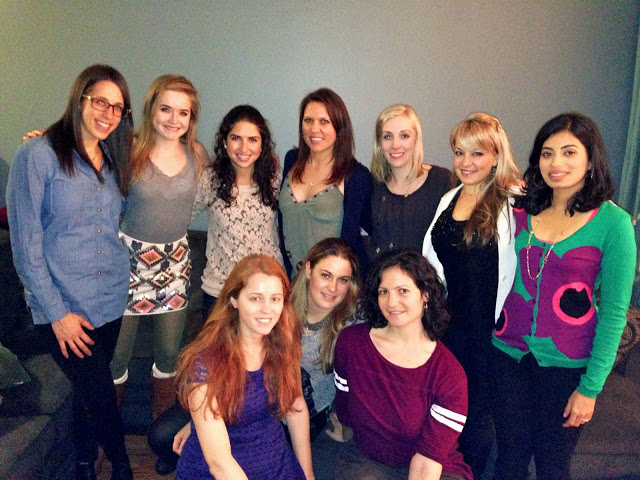 Rebecca invited us to a potluck Thanksgiving meal at her apartment, and I couldn't wait to meet, mingle, and munch!  All the food would be paleo (grain-free/gluten-free/dairy-free (mostly)/sugar-free/refined-seed-oil-free...basically just real food).   If you follow on Instagram, then you saw some of the festivities as they were happening, but I've finally gotten around to sharing it with you all here on the blog. As it was a potluck, we each brought something of our own!  We had a spreadsheet to make sure that the meal would be complete.  My dish was brussels sprouts, and I couldn't be happier. 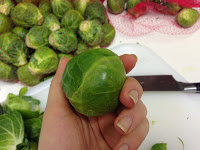 cookbook (read my book tour recap and recipe review here). They came out beautifully, if I do say so myself.

After taste testing one or two or five, I packed them up and made my way to Rebecca's.  I was greeted by her adorable dog, Elvis, who I declared my new best friend and spent the evening plotting how to bring her home with me. 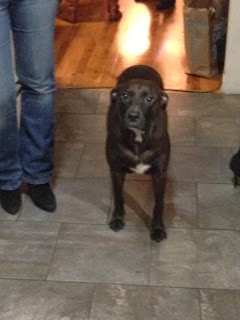 Rebecca had dared to make her own kombucha, so I was excited to have my first taste!  I'd never had it before, so I didn't know what to expect, but it was quite delicious!  Check that off the list, now, too, and add it to my continuous dare-to list! 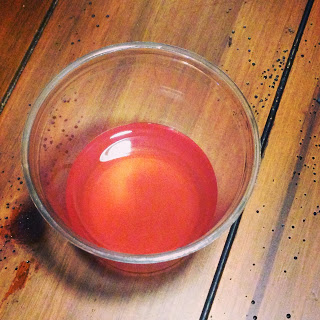 Rebecca was also cooking the dish of honor -- the Thanksgiving turkey.  It was her first, and she aced it: 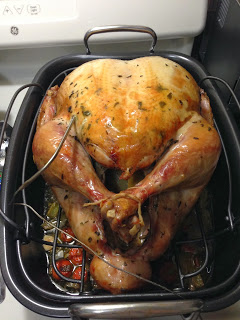 Carving the turkey proved to be a three-woman job, though... 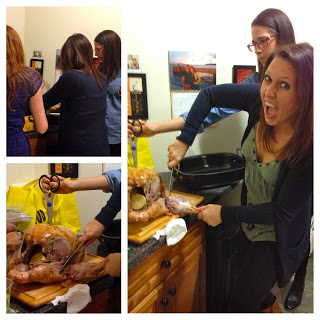 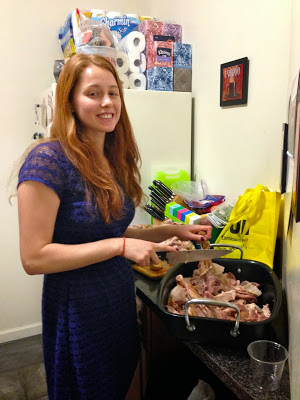 We talked, sipped our wine and kombucha, and played with Elvis for a good while.  I caught up with old friends and got to know some great new friends!  As always, it was incredible spending time with like-minded people who value health and well-being in the same way I do.
Finally, all the dishes were ready and dinner was served! And dessert happened, too.  The pumpkin cookies were out of this world, and I swooned over Amber's chocolate pecan pie. 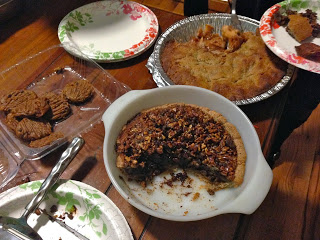 Stay up to date on Paleo events in NYC by joining the Paleo NYC Meetup Group!

Thank you, Rebecca, for hosting us, and thanks to all the wonderful women at our friendsgiving for the good eats and fun night! I look forward to seeing you all again, soon! Have you ever partaken in a "friendsgiving"?  Share your stories below!
5 comments: